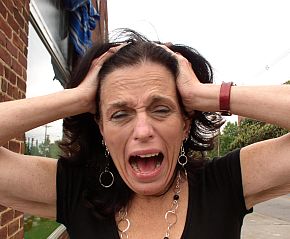 Years ago, in the days of  ‘chat rooms’ and message boards (do such things still exist?), anyone who took part in these internet hot spots probably at one time or another got involved in an internet ‘flame war’.  Remember back in the day when your friends in the neighborhood would pick one unlucky kid of the week to pick on? The week in which you were the kid really sucked. However, everyone made up until the next kid was voted off the neighborhood island for a few days. I did my tour of duty (call center employment where gossip is an *understatement*)…. I used to sit there and watch the ‘in group’ look at people and talk, talk, talk behind backs. I was not immune. I know they thought I was oblivious to the gossip crap at both the bank and Liberty Medical….. especially Liberty….. but I was not, not, so not going to get caught in the sad and childish nature of backstabbing and I never will.

So what happens when you post something harmless…. something you think is ‘neat’ and you get attacked? So you defend yourself and the guy grows fangs. So you delete a harmless picture (not aimed at anyone). I have enough troubles in my life, I am not going to sit there and have some ‘know it all jerk’ ruin my peace over something really stupid! Yet he has to go on and PM me and attack me further… over a picture; a non-partial picture which he did not agree with my (and numerous other peoples) interpretation of.  It is like, “Dude, pick your battles, really!”. When I removed the post he could not leave well enough alone…. no, he had to personally attack me and use curse words (which is a class 4 misdemeanor in VA). I have not decided what I am doing with it yet. If he had just left it alone when I deleted the post. But no… and that is why I am considering pressing charges…. tho not 100% yet. Lucky, I have it on message. It is right there for anyone to read and that is not hearsay.

I don’t have time for creeps and jerks. If I speak with someone or friend them it is because I find them nice, neat, caring and trustworthy. I also watch EVERYTHING I say to anyone on the Internet if I am not 150% sure about my trust in them. Personally, I think people like that have low self-esteem and have to put other people down to make him/herself look better.

So my song for the day is for all the fake people out there….. whether you are an internet bully or doing any sort of ‘stretching’ of the truth… one of my faves by Radiohead. And no, I DID NOT pick this video because one of the babies in the middle of it is wearing red with white polka dots! The song stands on its own awesome merit, but the cute baby was just a nice little polka dot coincidence! Enjoy. Until next time. K.