I am sure I will kick myself as I go along thinking I missed “this song and that song” but I thought and thought and these were the ones that came to mind so I am going with them. In my house we boast anything from “Mozart to Metallica”.  I pretty well like anything EXCEPT: Rap (with a few small exceptions), TWANGGGGGGY country and death metal. Speaking of metal, one of the funnest times Paul and I had was going to Bristow, VA and seeing Godsmack as the header and Rod Zombie (that man is a lunatic, said with love, of course!) and then somewhat known, now well known, Shinedown. WE ALSO got to MEET…. yes MEET every member of Shinedown! 🙂 . They were amazing and patient and there was every type of people there from the pot smoking “ZZ Top twins” in front of us who graciously offered to share (we declined as did everyone around us…. I think everyone was afraid…. very afraid…. of just what might be laced in that joint!). There was a very white collar sort of guy sitting next to us and everything in between. 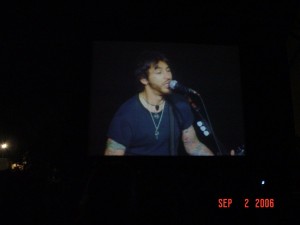 Picture taken at the concert we attended! What fun it was!

For those who loved Rock and Roll, it was a “Magical Ball”. If I was high on anything, it was the one and only beer I had that night, the crisp evening air that early September evening and the hours of non stop good music shared with others soaking it all up!

Godsmack was busy promoting their (then) newest CD, “Godsmack IV”. The single for the CD had been playing for weeks on the radio. It is with great pleasure, I submit my #24th greatest song ever… and while I won’t call it a ‘religious’ song, I will call it ‘spiritual’

We all knew…. it went dark and then…. Sully started his harmonica and the audience, including Paul and I went *CRAZY!!!!*. What a rush!

Here you go…. Kelli’s #24 best ever song, “Shinedown” by Godsmack. Listen, you might be surprised! 😉