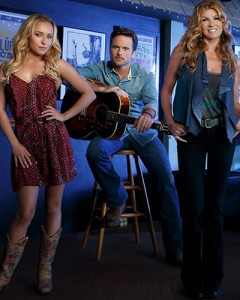 They did it again! This gutsy, sudsy but oh, so well written show hit a pain so deep in me that we had to pause the DVR so I could cry it out. I am talking about the last episode (for Season One) of “Nashville”. Now this episode had about a million and one things happen but the story line I am referring to is the death (suicide/overdose) of Juliette’s Mother, Jolene. The character Jolene had been clean and only used again to get the guts up to kill the evil troll Dante who had blackmailed her daughter with a sex tape. My only complaint here is this was a little weak. Sex tape? This was just a bit 1985-ish of them in my opinion. No one cares anymore about a sex tape but nonetheless they needed something to use as a object to blackmail the young super diva so I suspect a sex tape was just as good as anything else. In any case, unlike Jolene, my Mom did not quit drinking nor did she even admit there was a problem. With my Mom I could have chosen for there to be a lot of baggage: she used parental alienation when I was younger to try and turn me against my Dad, a few months before I turned 18 she cashed in an insurance policy my Dad had been paying into so I could cash it in when I turned 18 to have a little money for college and she verbally abused and at times slapped me a good one across the face. The list goes on. My point, however, is not to bash my mom. The reason I am stating all this is for one reason: out of all the things she did: I only ever asked my Mom one thing….. one….. to get help for her addiction to alcohol. In addition, I dropped any grudge I had about the other things, including the money she literally stole out from under me, because I knew she had an illness. I just wanted her to get help.  I told her when she did this, I would be with her every step of the way and be her biggest fan. She quit drinking the day she died. 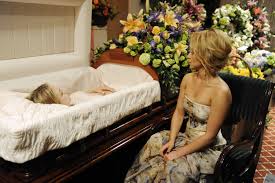 There are not enough words of praise for Hayden Panettiere (who, just for trivia,  shares her middle name Leslie with my youngest daughter; both girls who have gender neutral first and middle names! Just some trivia there and both girls talented beyond words I might add….. maybe there is something there parents, in naming that is 😉  ). In any event, Hayden, Thank You! You did your research well and acting from the gut… from the heart. I am not sure how you did it or what method you used to capture what it is to be the child of addiction, but you landed it hook, line and sinker. Again, thank you! This subject is rarely touched in television or movies like some sacred cow that no writer wants to go near. Everything else is beat to death: addiction in the 1st person view, lying, cheating, hoarding, over-indulging, back-stabbing, drama, drama and more drama. There are shows that scope every subject but other than this storyline on “Nashville”, I cannot remember the last show that dealt with being an adult child of an alcoholic/addict. When Juliette screams out, “I should be celebrating it is finally over!”; that is where I lost it and we had to pause so I could cry it out. I was trying to eat my dinner to make it worse. Try losing it with a mouth full of ribeye! I thought my husband was going to have to perform the Heimlich maneuver on me. You see, out of respect to my Mom, I will never write (for the public to read) how/ in what manner she died. I will never print what the last few months of her life were like. But it was sad. It was as sad and pitiful as it gets. I can relate to that very scene. God, can I relate. You mourn…. you mourn the talented, colorful, loving person inside the horror of the cancer that would be addiction. Addiction is like an onion. Over the years it puts layers on a person until the real person is buried so far down inside, you really can hardly remember who that person is. So in a way when they are finally freed from the confines of this life, you celebrate for yourself (that is just human nature… especially if you have been abused by their addiction). However, a part of you celebrates for the real person who is released. They are no longer a slave to that bottle of wine, syringe, line of cocaine, etc. You picture them flying out of those layers and finally free! So their death…. as awful as it sounds…. on so many levels is a relief. It does not make your grief any less. If anything it magnifies it because you never got to have the relationship you wanted. You never got to heal. Nonetheless, my hope and prayer is that my Mom is whole and healthy now…… no need for that ‘fix’ of wine at high noon. I maintain one of the writers of “Nashville” must be the child of an alcoholic/addict. You do not ‘just’ write this…… only those that live this hell can understand it fully. 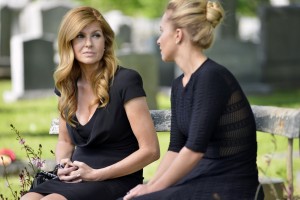 Another great scene was when Juliette went to the CMA awards. Oh how the diva in her wanted that award….. prior to her Mama dying. Even after her Mama died she came to the ceremony fully intending on sitting in the audience. It was when her manager, producer and other entourage pleaded with her that this was not the time or place for her to be there that she went to the funeral home and sat with her Mama finally breaking down and crying “You have left me all alone!” Then when she won Glenn brings the award to her. She was without emotion. She was cold. It was just a decoration…. her Mama was dead. Glenn gave her a very needed hug. Even as I type these words I cannot help but break into tears again for it just hits a nerve so raw…. so deep. It is a club…… a club for the children of addiction, no words necessary. At the end of the show in a way only Hollywood can wrap it up in a pretty little box, Juliette got a posthumous letter from her mother explaining everything and she finally lets down the wall she had built between her and her Mama…. even if it was just a bit too late. Her Mama at least got redemption in her eyes. She earned some respect for she took the fall, the shame, the heat and took it off Juliette and the little computer chip the sex tape was on and the person who put it there was forever gone with it.

I never got that pretty little box. I got a box of musty pictures ……about 1/3 of them which have no business being with me and need to go back to California. I am going through them very slow because each time I open that box it is like ripping a band-aid off of a scab and having to reapply a fresh one. I know I would feel different if she had just met me 1/2 way and had tried but alas there was ‘no drinking problem’ and everyone else had ‘a problem’ until there was no one else in her life (except from afar via occasional correspondence). I am thankful to the creators, producers, writers and actors of “Nashville” because whether they know it or not, they have served a great service to raise awareness to alcoholism and addiction! As I have said before, TV is for the most part a barren wasteland of junk. However, “Nashville” can seem like a night time soap if you just look on the surface, but scratch a bit deeper and there is oh, so much more! This song fits to a tee! 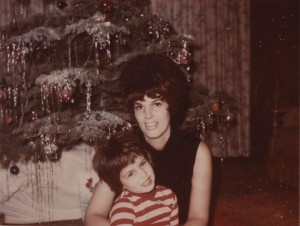